Why do radio stations play the same songs? 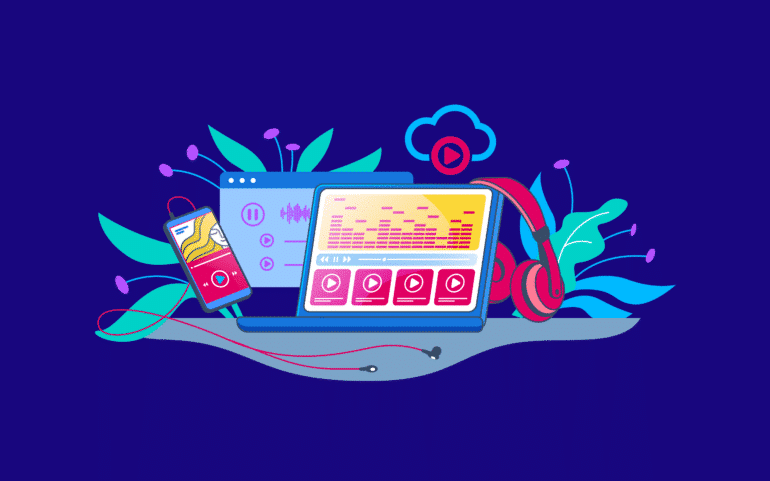 Why do radio stations play the same songs? As much as you might love the chart toppers for a little while – they quickly get old when it’s all you hear. Let’s explore the radio playlist.

If you’ve ever wondered why radio stations repeat the same songs over and over, you’re not alone. Sometimes, we’re sat in our cars, skipping through channels on the way to work, and it starts to feel like we’re stuck in a loop.

The same top chart tunes blare from our speakers over and over again – almost like musical Groundhog Day.

It’s not just one commute with the same music on every channel either. For weeks at a time, many of the most popular stations circulate the same 30-40 songs, as though they don’t have access to every album in the world at the touch of a button.

So, what’s the big deal? Where’s the variety?

Why do radio stations repeat the same songs?

One of the most appealing parts of listening to the radio, rather than just loading your own playlists through Pandora or Spotify, is you usually get a little variety. Radio can be an excellent place to discover new artists, experiment with different styles of music, and check out what’s trending.

There are, of course, exceptions to this rule.

While radio stations certainly do have a wide selection of songs available, you’re more likely to hear a common playlist among most channels. Obviously, after a while, this can get a little annoying – particularly if you’re in a retail or office job where you listen to the same station several hours a day.

So, why do radio stations repeat the same songs?

There are a few reasons.

Let’s start with the big one. A lot of the top radio stations available today are something called “Top 40” channels. This means they dedicate at least a portion of their airtime to covering a specific selection of songs – the most popular ones of the moment.

If you listen to specific channels, like rock and roll stations, you’re more likely to get a wider variety. Of course, even these channels will focus on playing the top “trending” songs in the genre from time to time.

The structure of the radio station isn’t the only reason they play the same songs over and over. Most radio stations also have a specific format for what they play.

To give everyone a chance to hear the most popular song, radio stations play on a “rotation”. A track added to the rotation joins an existing list of what’s available for the jockey to play.

So, why don’t we hear a huge rotation of songs over several days? And how come some songs seem to play multiple times before we hear something new?

The rotations available for a station are tiered, according to the popularity at the song. The higher the tier of the rotation can play songs very frequently, while lower tier rotations appear less often.

Songs are placed in rotations based on the song’s popularity, and how well it works with the genre of the station. Depending on the jockey or radio host responsible for a specific show, you may hear a wider variety of songs.

Some hosts have a lot more freedom when it comes to choosing what they play. A great host will deliberately add variety to shows – even if they have to play a selection of chart songs from time to time.

Most of the time, the songs you hear most often won’t be the radio hosts favorites – unfortunately. Though some stations do give their hosts more leeway, most will require them to play songs based on what’s trending in the marketplace.

After all, the more listeners a station has, the more money it can make. The best way to keep listeners around is to play the songs they love most at any given moment. Since new listeners can join into a stream all the time, it’s easy for radio stations to get stuck on repeat.

Why do radios have the same rotation of songs?

Not all stations will have the exact same songs on their rotation. As mentioned above, the songs you hear are largely dependent on the nature of the station.

Most specific genre stations start with a number of rotations in their specific style of music. They might add the occasional trending song rotation into the mix to help attract new listeners.

The reason many of the top trending song stations have the same rotation, is they’re all using the same rankings to determine which tunes are the most popular.

As new songs emerge into the marketplace, the radio stations continue to add to their trending lists, removing the ones they know deliver the least profit from their listeners.

Most stations will look at both regional and national rankings, as well as specific statistics taken from their own research. Over time, most channels will get a good idea of the kind of content their listeners like, and how often they’re happy to hear the same song over and over.

Why do radio stations play the same songs over and over?

The more you listen to a wider selection of stations, the more you’ll get a sense for what kind of music you’d expect from each channel. Some stations definitely do play music on repeat more than others.

This has a lot to do with the management of the station, and the freedom of the hosts.

Ultimately, it’s worth remembering radio stations aren’t actually in the “music business”. The business of running a radio station is quite different.

To make as much money from sponsors, advertisers, and other sources as possible, stations need to get as many ears listening to their stations as possible. The stations do this by playing the most popular songs as frequently as they can.

Some stations seem to play nothing but the same rotation of songs for several hours during the day. This is common among top 40 stations. Most of the time, these stations use things like talk shows and special segments just to break up the playlists.

The stations operate under the assumption listeners will turn on a radio and switch the station as soon as they don’t hear a song, they’re interested in. This is pretty common for most people.

Unless you really love a station, it’s unlikely you’re going to sit around waiting for a good song to come on. You’re more likely to stay tuned if you’re hearing a big hit.

Many radio stations also cater to commercial environments. Since stores and other locations don’t have the luxury of playing the music the staff like most – they need to choose a channel to play the widest variety of popular songs.

Playing the same trending songs repeatedly makes it more likely the station will appeal to all kinds of shopping.

What happened to variety on the radio?

There’s still plenty of opportunity to find new songs and amazing artists on the right radio stations. You just need to know where to tune in.

Jumping through different stations, both locally, and on the internet can give you a good insight into which hosts are most likely to commit to giving you the right variety. Over time, you’ll know where to tune in when you want to hear the top bangers, and where to go to listen to something new.

You can always consider experimenting with different genre-focused channels too, as this often leads to more variety. Ultimately, however, the chances are you’re going to hear some songs more often than others on the biggest radio channels.

Increasingly, fewer media companies own the entertainment produced and distributed in the world today, which means it’s harder for stations to break free and discover something new. This, combined with the focus on popularity means we’re mostly stuck with the same songs on repeat more often than not.

Need help finding some new channels? Check out our lists on Radio Fidelity for inspiration