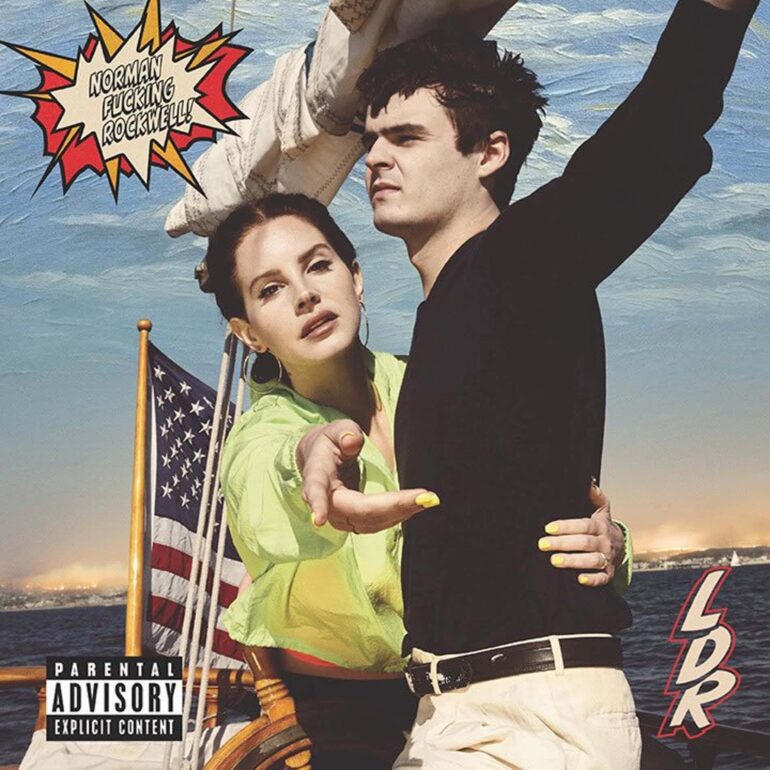 While it was always unlikely that we weren’t going to get a track about LA from an artist who has covered everywhere from Brooklyn to the West Coast, there’s more to Lana Del Rey’s new album, “Norman Fucking Rockwell” than a map of the US.

Rockwell is Lana’s iconic pop album – the one that we’ve been waiting for since she first sang her way into the hearts of the entire planet. Just as incredible and heady as you would have expected from the unconventional artist, Norman Fucking Rockwell album is a sordid and exciting insight into Del Rey’s most fantastical American dreams.

No-one but Lana Del Rey unearths such a contradictory combination of soft romantic daydreams and lust-filled chaos in a single song. NFR is arguably the best album of Lana Del Rey’s career.

Named after 20th-century illustrator, Norman Rockwell, the album is a commentary on the state of the US. Rockwell specialised in creating highly stylized scenes from 20th-century life, often painted to ignore the realities of the time, until he became more politically aware. Del Rey offers an interesting parallel with a unique combination of soft innocence and harsh reality throughout.

Before it was even released, Normal Fucking Rockwell by Lana Del Rey was set up to be a sensation, supported by the string of amazing tracks that Lana has released over the last year. Yet even with incredible 9-minute brilliance of “Venice Bitch” to prepare us, this is an album that defies expectations.

The album opens with a line that’s perfectly reflective on Del Ray’s stance on romance: “Goddamn, man-child/You fucked me so good that I almost said, ‘I love you.’”

However, despite all the chaos in the music, we end up with songs that feel shockingly real and authentic.

In our eyes, Norman Fucking Rockwell is an album of contradictions. We discover a woman who is hopelessly in love, yet resigned to misery at the same time – severely disappointed in the people around her, yet willing to forgive the men in her life, despite their unwillingness to change.

Normal Fucking Rockwell is a diary of emotional upheavals and drama. However, despite all the chaos in the music, we end up with songs that feel shockingly real and authentic. Perhaps it’s because Del Rey has always had a special way of filtering things through the window of Hollywood glamour in the past. Something about this album feels more raw and emotional than anything in her back catalog.

They say that America is a cultural potluck, brimming with different people from a huge range of dynamic backgrounds. That’s certainly something we can see evidence of in Normal Fucking Rockwell. The album sounds as though the songs were conceived in the seedy streets of the 70s, where every song seemed to be about the lust and passion of the LA nightlife.

In Lana Del Rey’s new album, you’ll move through a range of emotions from excitement and thrills to chills and anger. When Rey ends on the song “Hope is a dangerous thing for a woman like me to have, but I have it”, she speaks to every dreamer yearning for something more.

Del Rey tells us that America is a messed up and crazy place, but she’s along for the ride. Norman Fucking Rockwell isn’t totally a surprising record – it’s exactly what you would expect from an innovator like Del Rey. Though the album still holds a significant amount of Del Rey’s unique personality, there’s a subtle evolution in the songwriting and production too. She’s not merely repeating the same bohemian sounds of her past – she’s moving into a new and welcome era of soft rock and timelessness.

While everything ‘feels just like Lana’ – NFR proves there’s yet more to come. There are moments of surprise woven into this collection of songs. For instance, the surprise inclusion of Sublime’s “Doin’ Time” on the album. Though there’s a more mystical air to this reimagined version of the Ska-Punk song, but there are still echoes of the original thrown in there too.

Del Rey tells us that America is a messed up and crazy place, but she’s along for the ride.

Norman Fucking Rockwell review: Verdict
Normal Fucking Rockwell by Lana Del Rey is a whirlwind of emotion and retro intrigue. Similar to Lust for Life, the predecessor to the latest album, this enticing record is brimming with classic rock references and subtle nods to other sounds from a multitude of generations. And, sonically, Del Rey has rarely sounded better.

Lana Del Rey’s new album, isn’t about a performer merely presenting herself as a pop artist anymore. Rather, NFR provides a combination of cheekiness, intrigue, and political commentary, all with a compelling vintage air. While Normal Fucking Rockwell was imagined in a long-gone decade where drama and mystery hang thick in the air, there’s still enough conventional “Lana” in this album that you don’t feel like you’re rediscovering her all over again.