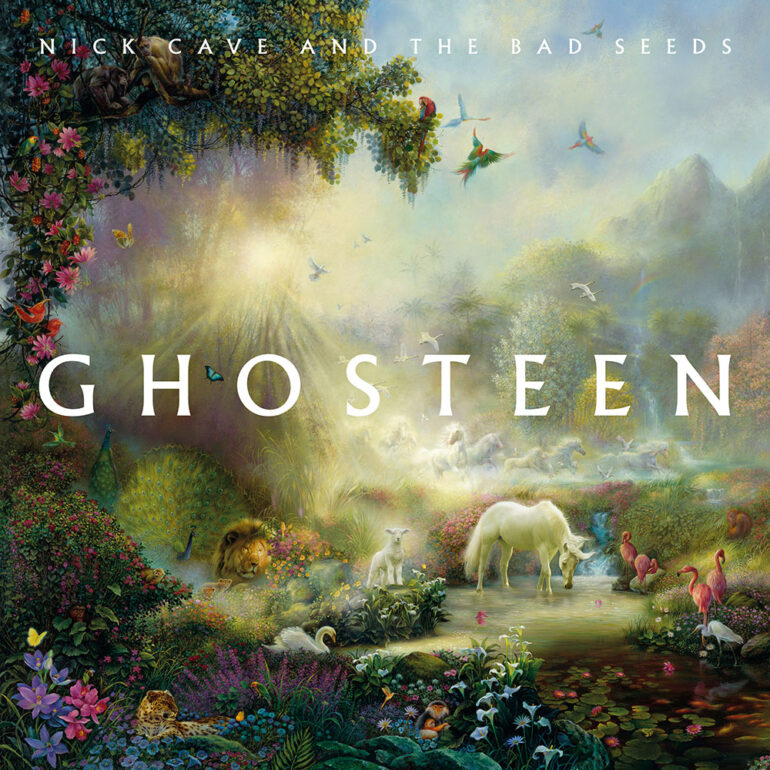 Nick Cave, leading voice of the “Bad Seeds”, shocked the world this year when he released a 2-part album: Ghosteen.

Having experienced an incredible amount of tragedy over the last few years, since his teenage son died in 2015, fans might have expected Cave to disappear from the music landscape. Yet, somehow, he managed to bring out the “Skeleton Tree” album in 2016.

In 2018, Cave went on to do two more unimaginable things. First, he started an AMA (Ask-me-Anything) online forum, where fans could ask him questions and get direct advice. Secondly, Cave used his online platform as a place to announce the upcoming arrival of a new album, Ghosteen. The Nick Cave Ghosteen album was officially released on the 4th of October.

Ghosteen by Nick Cave is like fingers around your heart.

If you’re planning on listening to the latest creation from Nick Cave and the Bad Seeds, we’d recommend that you prepare yourself.

At times, it makes for hard listening, but that’s not to the detriment of what is a fantastic achievement.

Nick Cave Ghosteen review: It cuts to the core

Devastating sums up Ghosteen. Emotionally, and lyrically, the album cuts to the core. There’s something about the gravitas of this collection of songs that mimics the harsh beauty of Leonard Cohen and Scott Walker – perhaps even Johnny Cash in the days of “Hurt.” Whatever you compare it to, Ghosteen by Nick Cave is like fingers around your heart.

Although many people assumed that Cave’s 2016 album, Skeleton Tree was an insight into the suffering that he had experienced following the death of his son, Cave revealed later that most of the songs were written before his child’s death. While there’s bleakness to the album, it’s nothing compared to the numbing experience of Ghosteen.

If Skeleton Tree showed us some of the immediate aftermath of losing a child, Ghosteen is a deeper, more profound exploration of what grief really is. The album tries to make sense of the pain, and highlight the despair that comes when you find no answer to the question: “Why?”

Perhaps the lesson Nick is trying to impart is that grief will always change us, but it doesn’t have to destroy us.

Ghosteen, the latest album by Nick Cave, is interesting because it’s split into two parts. According to Cave, the first part of the record is the “children”, while the second part is the “adults.”

“Ghosteen Speaks” sets the tone from the very outset. Offering an insight into the experience of loss from multiple, often unconsidered angles. There’s a depth to the track, almost connecting it to a lost child making a journey towards the other world.

While the concept of hope was hard to come by in Skeleton Tree, there’s a little more of it to be found in Ghosteen. In between periods of sorrow and grief, Nick Cave and the Bad Seeds give us a peek into what it might be like to find some semblance of peace after tragedy.

In the chorus of “Galleon Ship”, Cave reminds us that “The world is beautiful” and reassures us that “Everybody’s losing someone”. Perhaps the lesson Nick is trying to impart is that grief will always change us, but it doesn’t have to destroy us.

Crank it up: Your guide to the best wind up radio

Ghosteen hangs in the air, with atmospherics taking centre stage. While the album is split into two parts, the tracks aren’t particularly structured. Perhaps this is Cave’s attempt to highlight how fractured and disoriented grief can make us.

Percussion from Thomas Wydler has been largely replaced with electronic symphonies and dreamscapes. The album is heavily focused on ambience as Cave imagines a heaven or afterlife beyond this world.

The music on Ghosteen is highly spectral, too, with choirs and echoing violins giving depth to misery. Nick’s voice dances between angry and fragile, calling upon the complex array of emotions that grief invokes. All the while, lines of thoughtful lyrics disarm the listener, “And the little white shade dancing at the end of the hall / Just a wish that time can’t dissolve.”

Of course, this isn’t just about Cave. The Bad Seeds ensure that every nuance is sympathetically represented. The album is brimming with synths, throbbing bass rhythms and intricate arrangements. While repetitive loops dwell on the sense of pain, confusion and limbo.

Nick’s voice dances between angry and fragile, calling upon the complex array of emotions that grief invokes.

Nick Cave Ghosteen review: Verdict
The new Nick Cave album, Ghosteen, marks the 40th anniversary of the artist’s recording career. It should be a celebration of his success – but it’s anything but cheerful, even by Cave’s sombre standards. It is, however, a desperate exploration of pain and humanity that only ever feels real. Yes, Ghosteen is a painfully accurate account of grief. Yet, despite the sheer agony in this masterpiece of an album, there’s something reassuring about it too.

Cave reminds us that it’s only when we’re honest with ourselves that we can find any kind of “peace of mind.” Ghosteen is an album that helps us to rediscover the beauty in pain – even when it’s particularly challenging to find.
94
Where to buy
Amazon
Start typing to see results or hit ESC to close
Reviews DAB Radios Digital Radios Radios Portable Radios
See all results